This past summer our fire department union got a visit from Rip and crew from the Engine 2 diet. For those of you that haven’t heard about it, you need to watch “Forks over Knives”. I promise you you’re mind will be blown. After watching the documentary I recommend you buy the book “Engine 2 Diet”, those two go hand-in-hand. I won’t go into details, but essentially it’s a vegan diet but slightly stricter (No oils allowed). It’s a whole food, plant-based diet. You cut out Refined, Processed foods, meat (All animal proteins) as well as dairy and oils.

The “Challenge” is 28 long, and if you can stick to it 100% you will be surprised at how “well” you’ll feel. For our department, we were challenged to stick with the diet and lower our weight, cholesterol and waist (in inches). Winners would receive gifts certificates for groceries and vegan friendly restaurants. Now that you have the background information, let me tell you about my experience;

Earlier this year I was tagged on Facebook in a photo from a New Years Eve party my wife and I attended. I was pretty embarrassed. It’s like when you first heard a recording of your own voice for the first time and said “Is that really what I sound like?”… Except I said “Holy crap! Am I really that fat?!?” It was one of those moments when you realize how others see you. It’s like catching a glimpse of yourself in a mirror without sucking in your gut. I decided it was time to work on “me”. It was January which is a perfect time to start anything. I downloaded an app on my iPhone (my fitness pal) and I was able to count calories and fat etc. just by scanning the barcodes. It was awesome. I dropped 30 lbs in 4 months. Then I plateaued. For a couple months I stayed steady, then came the challenge. It’s was again, perfect timing. It allowed me to change things up and motivated me to lose the last 20 lbs I wanted, to fit into to an ideal weight for my height. The best part, is that I ate about three times the amount of daily calories as I was eating to lose the first 30 lbs. and I was still losing weight. It makes a huge difference when you look at the type of food you put in your mouth instead of focusing on the quantity.

I was eating whole grains, fruit, leafy greens (Kale is awesome) even dark chocolate. It was fantastic. Before the 28 days were over, I was seeing results but more importantly, I was FEELING it. It’s not easily explained unless you try it out for yourself. Even after two weeks I was feeling it.

It was pretty easy to stick with for 28 days because my wife was on board for the whole thing. She works in breast cancer research, so she was way ahead of me in the education of red meats etc.

One of the more memorable stories from my 28 day journey was an incident at the Firehall which almost got physical based solely on dinner. Here’s the scene;
At the Firehall we are there for 24 hours, so we will normally eat breakfast lunch and dinner together and split the cost of groceries at the end of the shift. Well, since I was the only one in my crew on this diet I told the guys I would be “out” on all meals for the next 4 weeks. Needless to say being a vegan in a Firehall (no matter the reason) will undoubtedly attract attention and subsequent ribbing from the boys. After about two weeks of this I told the guys I would gladly be “in” on a meal if they agreed to let me cook a vegan dish. Well my captain jumped all over that idea. It was decided that next shift I would cook the meal.
I decided to go easy on the boys and I made them portobello mushroom burgers (the mushroom is the meat) with grilled veggies, avocado and humus with oil free home fries. Well long story short, when the meal was ready the boys came in the kitchen to eat and one guy just lost his mind. You would think I spit on his plate and told him to eat it. Once he found out there was no meat, he went on a tirade swearing up and down all over the place saying “He can’t make me eat this s#%t…” Etc. etc. he was actually in my face and appeared to want to get physical with me. Over a meal. A meal that I bought on my own time. Cooked without help, AND bought without asking for reimbursement. He eventually ate it and complained to everyone in the district about it. It actually backfired when I told my side and everyone found out he got it for free and didn’t help prepare it.

All said and done, after the 28 days I dropped 14 lbs and 60 points off my cholesterol (which was already in a healthy range from my earlier diet). The eventual winner of the challenge lost 34 lbs…34 bloody lbs in 28 days. I have no doubt I could have done the same if I had that much weight to lose. The average weight loss for 60 firefighters was 12 lbs. a success all around.

I would recommend you do the research for yourself and if it fits for you, try the 28 day challenge. In the grand scheme of things, 28 days really isn’t a long time to try something new.

I hope today’s post didn’t come off as an advertisement, but I just wanted to write about something other than the dad side of me. After all this site is about “Fatherhood and Firefighting”, so this is a small window into my life in the Firehall. Oh and for those of you wondering, the guy who got angry over the portobello burger eventually got over it and now it’s a running joke within my crew.

Keep your head up and your nuts covered! 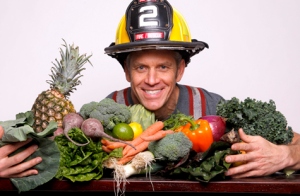