It’s been a while since I posted, so I wanted to give everyone an update. My wife and I have found a new Therapist after hitting a dead-end with our previous one. We weren’t making any progress and recognized it was either time to cut our ties and make our separation official, or find a new Psychologist. Luckily my wife got pointed in the right direction and found someone who may have been sent from god (and I’m not even the religious type.) He’s brought us to a spot where we can build on healing. We actually travel to our sessions together now… IN THE SAME CAR! Without fear of having a negative session and arguing all the way home.

This week midway through our session he pulled out a poster (he loves visual teaching aides and apparently so do we). I had never seen it before, but it was titled “Children Learn What They Live.” 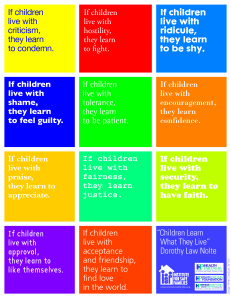 I looked it over as he explained it, and within seconds I had tears in my eyes, as I do again as I type this. I was so embarrassed because at the time, no one knew why I was crying and I wasn’t able to speak right away. After composing myself I explained what I was feeling. I had instantly been hit with the reality that I was my dad. Everything I was exhibiting was everything I watched growing up.

When my mom left in 1990, I was 10 years old. I don’t remember much of my life before 10, so everything I remember of my dad, was when he was a single father. My dad was never the type to have a lot of friends, he didn’t go and play golf or hunt, or show much of an interest in anything really. He smoked pot and rented movies and would go to the bar every weekend and bring home a different woman. Those things aside, he was a great dad; he did a fantastic job with what he had and what “tools” he got from his dad. If you’re caught up on my blogs, you’ll know that his dad was murdered because of his alcoholic and abusive ways when my dad was only 16, so that was his example. I’ve always thought my dad was different than most dads because none of the father’s day cards ever seem to fit him. I always knew he loved my brother and I, and I know he would always put us first and foremost.

Now that I’m a dad, I realized I have essentially shut myself out from my friends. I still see them every month or so and we still play Beer-League Baseball in the summer time, but ultimately I’ve kept them at a distance. I seclude myself from the outside world and push people away.

One of the biggest differences is growing up in the Internet Generation. This facilitates my ability to distance myself while still being “connected”. I am protected behind the screen. This isn’t healthy, this isn’t productive, and this isn’t a proper example.

At the same time I was realizing how I became my dad, I was also smacked with the reality, that if I don’t change it, I’ll be continuing the cycle and passing it on to my boys. I can preach and tell them what to do until I’m blue in the face, but if I’m not doing it, they won’t live it. We all have the ability to be the person we want to be. We all have choices, some easier than others, but we all have them none-the-less. It’s never too late. 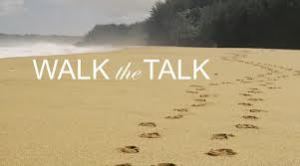 After explaining this in my session to our therapist and saying how embarrassed I was because I was crying, he explained to me that I should never apologize for being authentic. God as my witness (Maybe I am more religious than I realize) I have never felt more secure in my feelings and how I choose to express them, than when I am in these sessions. I’m buying what this guy is selling and so is my wife.  I’m finally seeing progress and I’m starting to feel like there is a happy ending here to be had.

If you have a chance, read over the poster as I did, and share it with your partner. I truly believe the sooner you ‘get it’ the sooner everyone around you including yourself will benefit. Actions truly speak louder than words, and they also shape those around us who look to us for guidance. Even if we don’t realize they’re watching.

Keep Your Head Up and Your Nuts Covered

One thought on “Therapeutic Breakthrough; Children Learn What They Live”